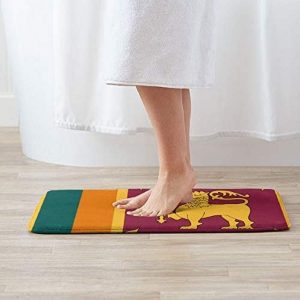 Inquiries have been launched into doormats sold on Amazon with a print of the Sri Lanka flag.

The Foreign Ministry of Sri Lanka has taken necessary measures to address the advertising of the doormats on Amazon.

The doormats are being sold on Amazon.com for US$ 12 per piece. The site is reported to be distributing the doormats worldwide from Singapore and has announced a shipping cost of US$ 9.02.

When inquired about the doormats, Chairman of the Consumer Affairs Authority (CAA) Major General (Retd.) Shantha Dissanayake told Colombo Gazette that the relevant authorities will be instructed to take legal action if the products are distributed to the Sri Lankan market.

He further said that steps are being taken to inform the United States of America (USA) Embassy in Colombo via the Foreign Ministry of Sri Lanka about the doormats.

Meanwhile, Foreign Ministry Secretary K.J. Dharmathilaka told Colombo Gazette that it was illegal to produce doormats bearing the national flag of a country.

He further said the Foreign Ministry has taken measures to inform the US Embassy in Colombo in this regard.

Foreign Secretary Admiral Professor Jayanath Colombage has also informed the Sri Lanka Embassy in Beijing to contact the manufacturer, who is based in China.

The Foreign Ministry said Colombage has directed the attention of the Chinese Embassy in Colombo to address the matter as well.

Admiral Jayanath Colombage has also instructed the Sri Lanka Embassy in Washington D.C to follow up on the matter with the advertising platform Amazon. (Colombo Gazette)

Over 160 activists condemn statement against Ambika