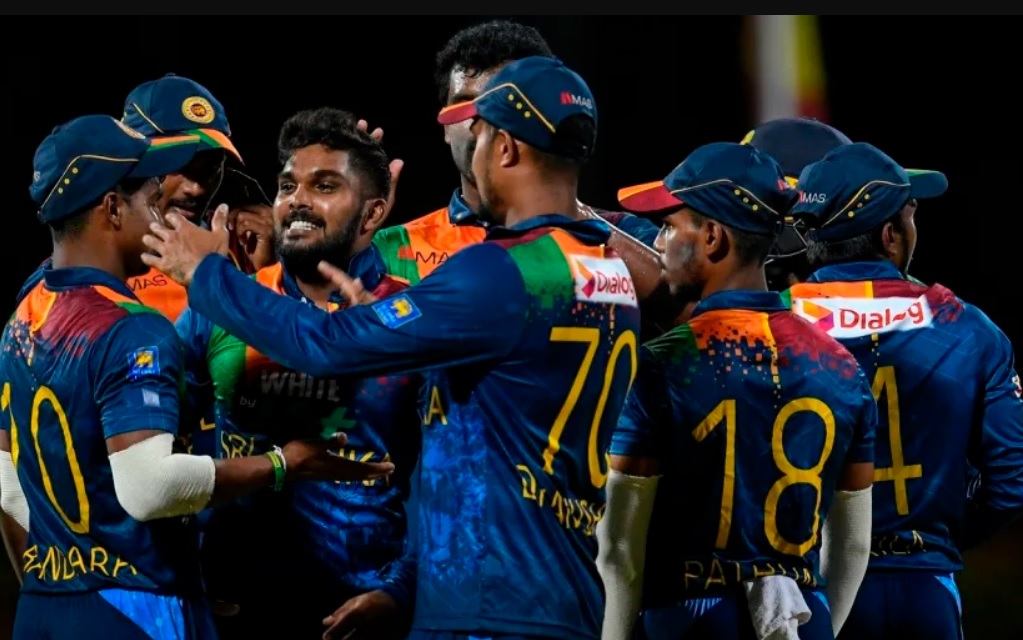 Sri Lanka cruised home in the second T20I against the West Indies at Coolidge Cricket Ground.

A brilliant all-round display from Wanindu Hasaranga and a 95-run opening stand helped Sri Lanka to the series-levelling 43-run victory on Friday.

Hasaranga was named Player of the Match after taking 3/17 with the ball and scoring an unbeaten 19 with the bat but he was far from the lone performer.

Sri Lanka’s spinners put on a clinic, while Danushka Gunathilaka and Pathum Nissanka shone with the bat.
Chasing 161 to win after losing the toss, the West Indies’ hopes suffered an early blow as Akila Dananjaya struck for Sri Lanka in the third over.

Out for a golden duck in the first T20I, Gayle looked in better touch this time around, crunching a four and a six in the fourth over. Things were starting to look brighter for the West Indies after Lendl Simmons hit a six and three fours off one Thisara Perera over to take the hosts to 45/1 by the end of the power play.

The introduction of Hasaranga and his wrist-spin by captain Angelo Mathews proved a masterstroke. The leg-spinner struck with his first ball, removing Gayle (16), and then again with his fifth to trap Simmons in front for 21.

Jason Holder (9) came and went, hitting a six one ball but falling the next to Gunathilaka in the ninth over.
Mathews reintroduced pace in the 11th over and it paid immediate dividends as Dushmantha Chameera picked up the wickets of Dwayne Bravo (2) and Nicholas Pooran (8) to leave the West Indies limping at 66/6.

Lakshan Sandakan (3/10) and Hasaranga got the job done from there, combining for the final four wickets to bowl the West Indies out for 117. Collectively, Sri Lanka’s quartet of spinners took eight wickets for 48 runs from 12.4 of overs, with Dananjaya finishing with the impressive figures of 1/13 from his full allotment while Gunathilaka took 1/8 off his single over.

Earlier, it was an innings of two halves for Sri Lanka with bat. They made 94 without loss in the first 10 overs, but only 66 at the expense of six wickets in the second 10.

Sri Lanka raced out of the blocks after electing to bat first, with Gunathilaka and Nissanka putting on a 95-run partnership.

The duo laid the perfect platform for the touring side, with Gunathilaka hitting four fours and two sixes on his way to 56 off just 42 balls and Nissanka with four fours and a six in his 37 off 23.

They looked set to cruise to a hundred-run stand but the introduction of Bravo put a spanner in the works.
Brought into the attack in the 11th over, Bravo showed impressive agility and accuracy to run Nissanka out. Called through for a tight single, Nissanka’s innings was ended by a direct hit by Bravo, who moved quickly to pick up the ball as he completed his follow through before swivelling to throw down the non-striker’s stumps.

Three deliveries later Bravo had Gunathilaka caught at mid-off, conning the opener with a slower ball. The veteran all-rounder then heaped more woes on Sri Lanka, accounting for Dinesh Chandimal (3).

Obed McCoy then entered the fray and made his presence felt, removing Mathews (13) in the 16th over and running out Thisara Perera (2) in the 17th. Running in from deep square leg, McCoy fired in a fast and accurate throw to Holder, who completed the run out.

The Sri Lankans were in trouble at 129/5 at that point but a handy 21 from Ashen Bandara, out to Holder in the final over, and an unbeaten 19 off 11 from Hasaranga ensured they reached 160/6.

That total proved to be more than enough.