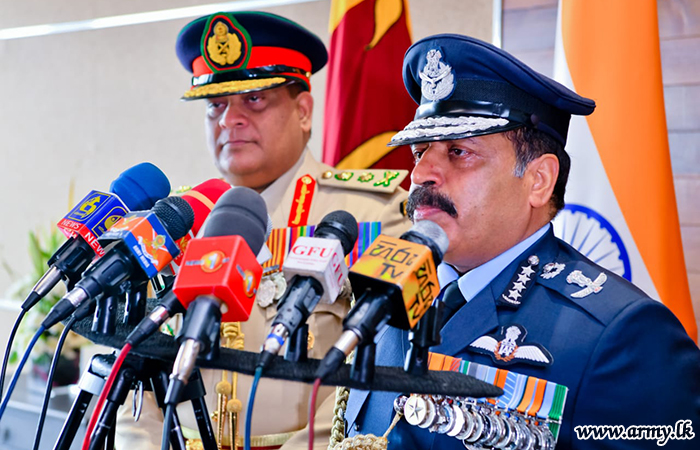 India is confident its defence relationship with Sri Lanka will strengthen further.

The Chief of Air Staff of the Indian Air Force, Air Chief Marshal Rakesh Kumar Singh Bhadauria said that Indo-Lanka defence ties has been on the rise.

Air Chief Marshal Rakesh Kumar Singh said that the trajectory of mutual defence cooperation between India and Sri Lanka will continue to rise.

He was speaking to the media after meeting Chief of Defence Staff, Commander of the Army and Head of the National Operations Centre for Prevention of COVID 19 Outbreak (NOCPCO), General Shavendra Silva.

“I am sure our relationship will grow from strength to strength,” he said.

He noted that Sri Lanka had received coronavirus vaccines from India as a gift and more are now being purchased.

Meanwhile, the Army media unit said that the cordial meeting that ensued between the visiting Air Chief Marshal Rakesh Kumar Singh Bhadauria and General Shavendra Silva at the Commander’s office, largely centered on existing projects of bilateral cooperation and sound relations that prevail between both organizations as well as with the Sri Lanka Air Force.

They also shared thoughts on possibilities of further enhancement of security cooperation in the skies and strengthening of ongoing bilateral working relations.

Towards the end of the cordial meeting, General Shavendra Silva presented a special memento to the Indian Air Force Chief and the gesture was reciprocated.

Before his departure, the Chief of Air Staff of the Indian Air Force left compliments in the Visitors’ Book at the Commander’s office. (Colombo Gazette)