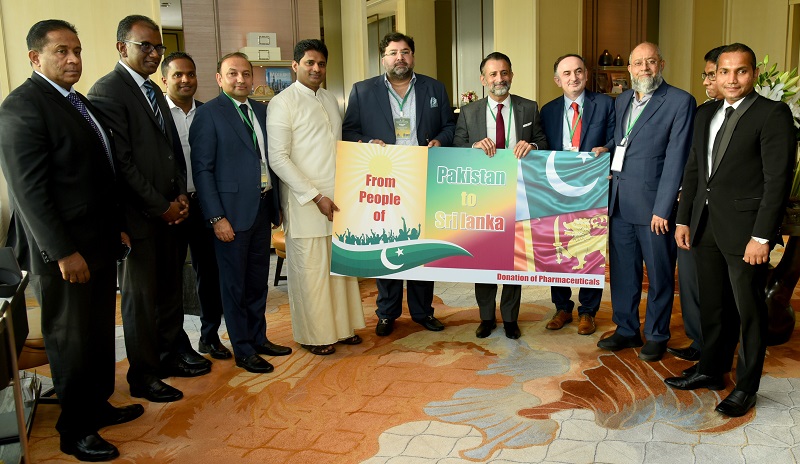 The Sri Lanka Pharmaceutical Manufacturers’ Association (SLPMA) facilitated a bilateral meeting on the 24th of February with visiting representatives of the Pakistani Pharmaceutical Manufacturers’ Association (PPMA). The meeting was presided over by Hon. (Prof.) Channa Jayasumana, M.P., State Minister of Production, Supply and Regulation of Pharmaceuticals and accompanied by Mr. Rohitha Uduwawla, Secretary to the Ministry and Dr. Lakshitha Rajakaruna. The meeting took place on the sidelines of the first state visit by Pakistani Prime Minister Imran Khan to Sri Lanka.

Responding to the invitation by the State Minister, Mr. Kashif Sajjad Sheikh, Head of the Pakistani Pharmaceutical Delegation promised to share the best practices and technical knowhow with the SLPMA. He also invited the State Minister and SLPMA to visit Pakistan to make a Road Show on the Opportunities for Pharmaceutical manufacturing in Sri Lanka and enter in to MOUs with prospective Pakistan companies, which will be facilitated by PPMA. Elaborating further, Mr. Kashif stated that it is a good sign that Sri Lankan government policies and the National Medicinal Regulatory Authority are supporting local manufacturing. He also emphasized the importance of extending the present buyback policy of government for new products to be developed in the future, which will be a definite boost for local manufacturers.

The SLPMA emphasized on the importance of the Pakistani pharma story for local policy makers, especially in learning how the Pakistani government moved towards formulating a long term policy and incentivised the private sector towards local manufacturing. Currently producing over 93 drugs providing 15% of the local requirement of pharmaceuticals, the SLPMA pointed out that synergy between the two chambers will result in crucial technical transfers from Pakistan to Sri Lanka allowing the local industry to benefit from the years of research and development by the Pakistan Pharmaceutical Manufacturers’ Association. The SLPMA is hoping to achieve 50% production of local pharmaceutical requirements by 2025, and a target of US$ 1 Billion per year in exports by 2030. SLPMA was represented by Mr. Sanjaya Jayaratna (President), Mr. Kalana Hewamallika (Vice President), Executive Committee Members Mr. Viraj Manatunga and Mr. Murtaza Esufally.

Discussing long term opportunities to work together, the Sri Lankan delegation invited Pakistan to relocate its pharma export centers in Sri Lanka, both for its strategic location globally and also because Sri Lanka being one of Pakistan’s largest pharmaceuticals export markets. The Sri Lankan delegation accepted the invite of PPMA to visit Pakistan to conduct a Road Show and experience the success story of Pakistan Pharmaceutical Manufacturing Industry, which are going to be key important factors to the development of Sri Lankan Pharmaceutical Manufacturing Sector.

The SLPMA was established six decades ago and has since represented local manufacturers of pharmaceuticals in Sri Lanka currently numbering over 20, including established Sri Lankan Conglomerates, innovative new local ventures, multinational pharmaceutical companies, and the State Pharmaceuticals Manufacturing Corporation (SPMC). Many of the facilities belonging to SLPMA members have won local Presidential Awards, and awards conferred by the State Pharmaceutical Cooperation, while some members have made a mark at international conventions on pharmaceuticals winning International Awards for their outstanding achievements in research and development. The Sri Lanka Pharmaceutical Manufacturers Association is an affiliated trade association coming under the aegis of the Ceylon Chamber of Commerce and comprises those members who are solely involved in the manufacture and distribution of medicines in Sri Lanka. It collectively represents local pharmaceutical manufacturers and lobbies on behalf of its members, and in the best interest of the country. The SLPMA Secretariat is based at the Ceylon Chamber of Commerce and can also be reached on (011) 5588836.