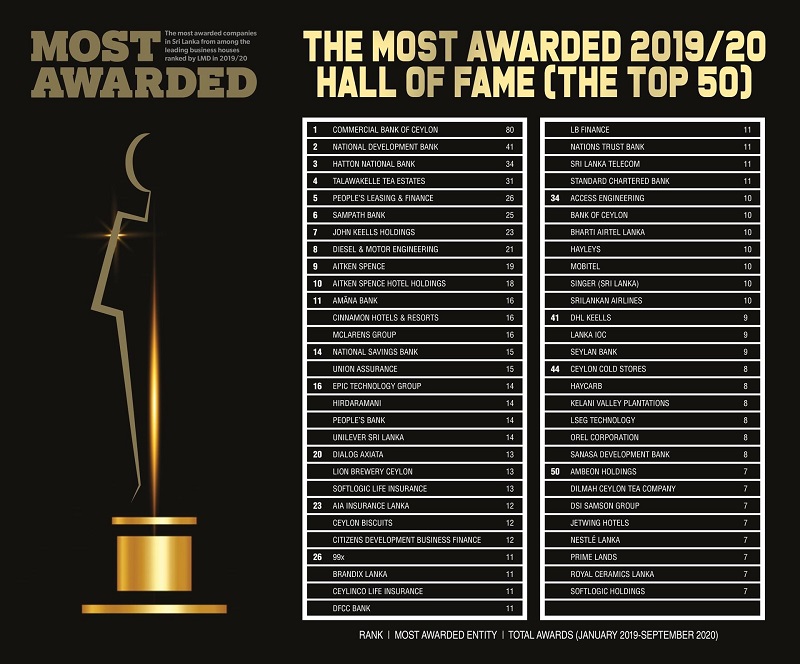 Continuing its rise among the country’s top corporates, SDB bank recently clinched a Top-50 position in LMD magazine’s first-ever publication of ‘Most Awarded’.

Reputed as the pinnacle of awards, the ranking system aims to recognize the country’s most awarded corporate entities, for accolades received across both the local and global business arena. ‘Most Awarded’ ranks the island’s top business establishments based on the cumulative awards received during the stated period.

For the period under review in the first edition, January 2019 to September 2020, SDB bank managed to surpass a long list of multinational corporations and diversified local corporates, on its way to the top 50 of the most awarded companies in Sri Lanka.

The bank’s recent corporate business focus, complementing its legacy as the apex bank in the SME sector plus a key driver of National development, has seen them steadily rise up the ranks of the country’s highly competitive corporate landscape.

Equally, SDB bank’s continued focus on digital innovation has allowed for their current corporate standing, including developments such as the introduction of their Business Internet Banking facility; the modern banking services facilitated by the SDB Mobile App; the relaunch of a mobile responsive website plus a vertical VISA debit card; and the advancement of their lifestyle payments app UPay.

UPay enables customers to make payments and perform transactions with their smart phones at their convenience.