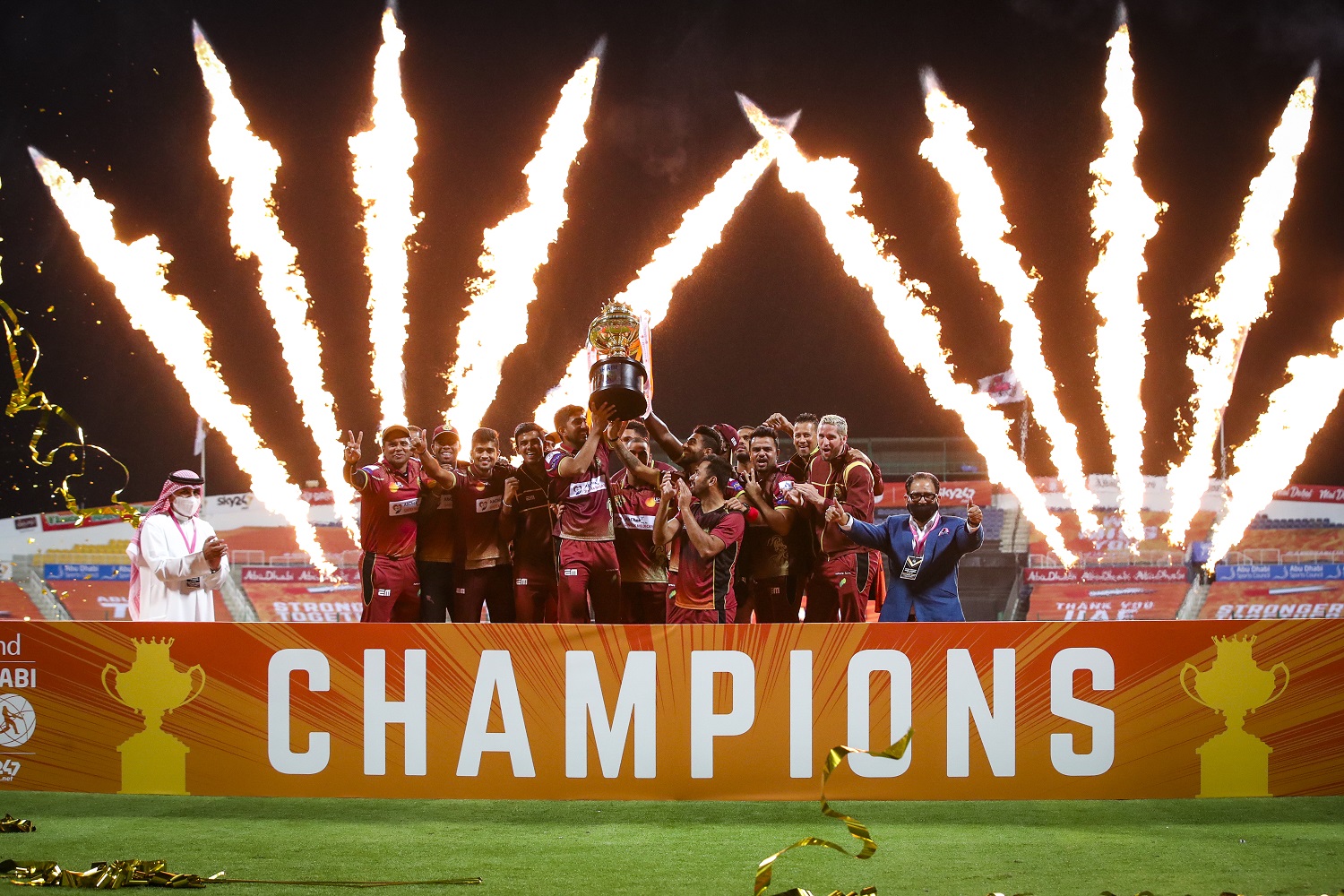 Through disciplined bowling from Sri Lanka’s promising players 20-year-old off-spinner Maheesh Theekshana and 22-year-old Dhananjaya Lakshan, backed by the accurate UAE medium-pacer Junaid Siddique, Northern Warriors restricted Delhi Bulls to a paltry 81 for 9 and emerged as the champions through an eight-wicket win in the final of the fourth edition of the Alubond Abu Dhabi T10 at the Abu Dhabi Zayed Cricket Stadium.

Bulls’ batting choked in the crucial match and Warriors sailed to victory with 10 balls to spare through Waseem Muhammad’s 27 runs and Lendl Simmons and Rovman Powell remaining unbeaten with 14 and 16 runs respectively.

It was a spirited comeback by Warriors who had lost the qualifier to Bulls on Friday. They came back strongly to emerge as the champions for the second time after their 2018 edition triumph. In the 2018 edition too, they had lost in the qualifier and then gone on to lift the title for the first time.

Going into this final without their reputed pacers Wayne Parnell and Wahab Riaz, they played like brave Warriors. Sri Lankan youngsters Theekshana bagged three wickets for 13 while Lakshan took two wickets for 14. Siddiqui too chipped in with 2 for 19. Except for Mohammad Nabi who hit 21 runs, none of the other batsmen were allowed to play the big shots.

A determined Warriors won the toss and marched out to the field.  Bulls’ opener Rahmanullah Gurbaz scored the first boundary of the final off the second ball from Rayad Emrit. Evin Lewis hit the last ball of the over for the first six of the match over backward square leg. They picked 16 runs off the first over.

UAE medium-pacer Junaid Siddique then had Gurbaz brilliant caught by his UAE teammate Waheed Ahmed at covers on a second attempt for 13.  Off-spinner Maheesh Theekshana dismissed Lewis in the third over by having him brilliantly caught at mid-off by Rovman Powell for 10.

Bulls slipped into further trouble when  Siddique in the fourth over had Sherfane Rutherford caught by Fabian Allen at long on for 4.

Mohammad Nabi hit Allen for a six in the fifth over. By the halfway mark, Bulls were 55 for 3, looking for some big hits for an impressive total. Nabi then hit the first ball from Dhananjaya Lakshan for a six over fine leg but perished to the next delivery when he got caught at short third man by Simmons for 21. Lakshan could have got Bopara’s wicket too in the next ball, but Brandon King at sweeper cover dropped him. Fortunately for Warriors, that drop did not prove too costly as Theekshana, with the first ball of the seventh over, had Bopara caught at long-on for 9. Two balls later, he trapped skipper Dwayne Bravo leg before for a duck. He gave away only five runs in that over.

Chasing the target, skipper Nicholas Pooran promoted himself as the opener and cracked a boundary through the covers off the second delivery of the first over from Waqas Maqsood. He also pulled Fidel Edwards for a boundary and a six. With the last ball of that over, Edwards trapped Pooran leg before for 12.

Opener Waseem Muhammad had a lucky escape in the third over when Bopara at extra cover dropped him off Maqsood. Lendl Simmons picked a boundary to third man in that over. Waseem hit the first ball of the third over from Edwards through the covers for a boundary and also drove the fifth ball to the mid-off boundary.

Waseem then swung his UAE teammate Shiraz Ahmed for a six to deep mid-wicket and also pulled him for another boundary. Warriors reached the 50-run mark in the fifth over They needed only 32 more runs from the last five overs.

Bravo introduced himself for the sixth over and gave away only six runs. Shiraz struck in the seventh over by forcing Waseem to hit Bravo at mid-off for 27. Next man Rovman Powell top-edged Bravo over the wicketkeeper to get a boundary.

With just ten runs needed off the last two overs, Nyeem Young gifted a five-runs wide and then Powell hooked the next delivery for a six to march off as the champions of the fourth edition of the Alubond Abu Dhabi T10 tournament.