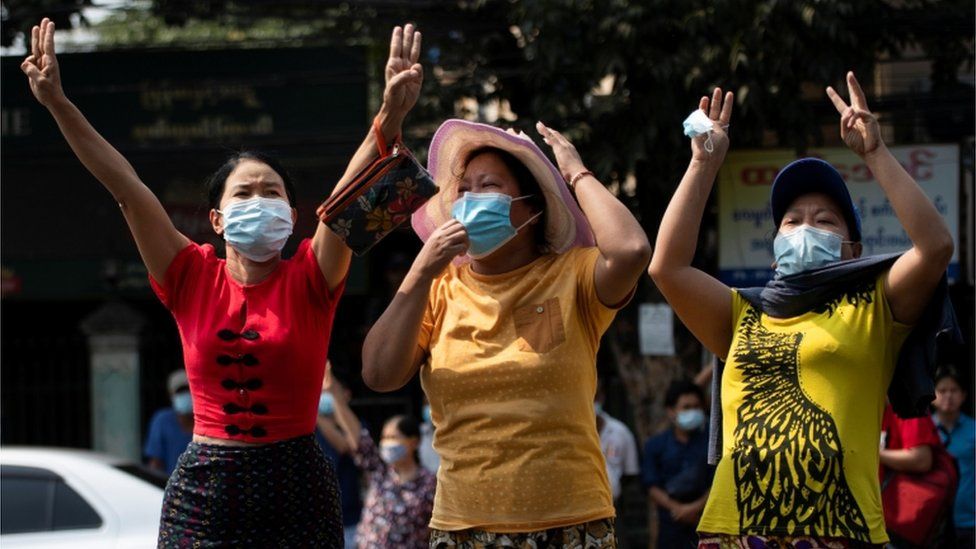 More than 1,000 people have gathered in Myanmar’s main city, Yangon, for a second day of protests, nearly a week after the military seized power.

“We will move forward and keep demanding until we get democracy,” one protester, Myo Win, 37, told the AFP news agency.

Police trucks and officers in riot gear were stationed on the streets near Yangon University.

On Saturday, the military shut down the country’s internet connections.

Smaller demonstrations were also reported on Sunday morning in Mawlamine and Mandalay.

Human rights group Amnesty International called the internet shutdown “heinous and reckless” and warned it could put the people of Myanmar at risk of human rights violations.

The military has not commented. It temporarily blocked access to the internet following the coup on 1 February.

he coup took place as a new session of parliament was set to open, following November’s landslide election win by the NLD party.

Many Burmese watched the events unfold in real time on Facebook, which is the country’s primary source of information and news. But three days later, internet providers were ordered to block the platform for stability reasons.

Following the ban, thousands of users were active on Twitter and Instagram using hashtags to express their opposition to the takeover. By 22:00 local time (15:30 GMT) on Friday access to those platforms had also been denied.

There was no official word from the coup leaders but AFP reported it had seen an unverified ministry document that said the two social media sites were being used to “cause misunderstanding among the public”.

A spokeswoman for Twitter said the ban undermined “the public conversation and the rights of people to make their voices heard”. Facebook, which owns Instagram, called on the authorities to “restore connectivity”. (Courtesy BBC)