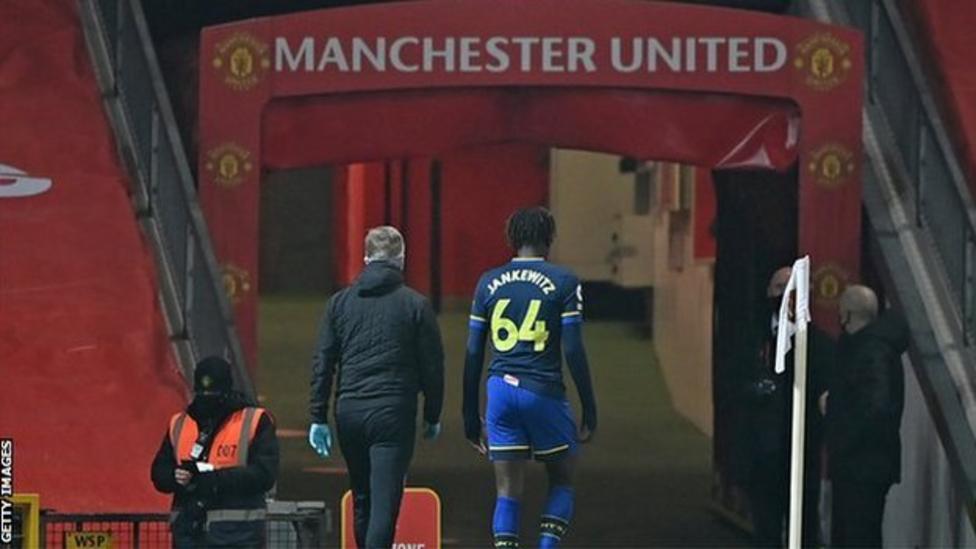 Manchester United equalled the Premier League record by putting nine goals past nine-man Southampton – the second time Saints have lost 9-0 in as many seasons.

A red card for Saints’ Alexandre Jankewitz after only two minutes triggered a complete collapse for the visitors, who were on the end of the same scoreline against Leicester City in October 2019.

It is only the third time a team has lost 9-0 in the Premier League, with United also beating Ipswich Town by that margin in 1995.

Aaron Wan-Bissaka opened the scoring with his first goal at Old Trafford. Marcus Rashford and Edinson Cavani also found the net either side of a Jan Bednarek own goal before the break.

After a fairly drab start to the second half, United cut loose, scoring five times in the final 21 minutes.

Anthony Martial ended an eight-match goal drought before Scott McTominay drove home from the edge of the area.

Then, after Bednarek became the second Saints player to be sent off – bringing down Martial to allow Bruno Fernandes the chance to score from the penalty spot on 87 minutes – the French forward netted his second, before Dan James wrapped up the scoring in stoppage time.

It was a stunning ending as United almost matched their club record 10-0 victory over Anderlecht in 1956.

By the final whistle, it had been forgotten that United had come into Tuesday’s game on the back of indifferent form – just one win in their last four matches.

The massive impact on their goal difference means it is now bettered only by league leaders Manchester City.

Martial should be particularly pleased with his contribution, even though it did not match manager Ole Gunnar Solskjaer’s four-goal salvo as a United substitute in an 8-1 win at Nottingham Forest in 1999.

At one point, it looked as though that seven-goal margin of victory was the one United would emulate. But Martial’s 90th-minute second – the first time he has scored two in a game all season – took the home side beyond that, and James completed the rout in the third minute of injury time.

Rashford and McTominay both produced noteworthy strikes for a United side that also had a penalty award overturned just before half-time.

Making a full Premier League debut should be a cause for celebration in any young player’s career. For Jankewitz, it was a catastrophic experience.

His second-minute foul on McTominay was committed right in front of Saints boss Ralph Hassenhuttl, who did not require the replays which made the challenge look worse with every viewing.

Hassenhuttl could only throw his arms up in the air in disbelief, knowing referee Mike Dean had no alternative other than to show the 19-year-old Swiss midfielder a straight red card.

The incident came less than a week after Jankewitz’s agent had started murmurings about a transfer and this sorry episode is unlikely to convince anyone the player has a future at St Mary’s.

After that, it was just a question of how long the visitors could survive, which turned out to be not very long, as Wan-Bissaka turned in Luke Shaw’s cross at the far post from a position Jankewitz should have been defending.

With Bednarek among the scorers after turning Rashford’s cross into his own net for the third, and one of those marginal video assistant referee offside decisions that took away the goal Che Adams thought he had scored at the start of the second half, it really was one of those nights best erased from the memory completely.

Unfortunately, that was not the end of the misery.

While Hassenhuttl can rightly point to Jankewitz’s dismissal as the key moment, there can be no excusing the way the team – though badly affected by injuries – had so totally collapsed by the end. (Courtesy BBC)