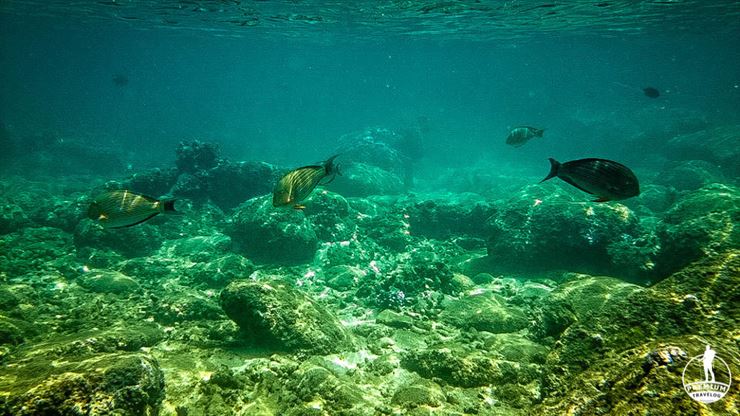 According to a recently published Environmental Impact Assessment (EIA) report, many instances of environmental destruction are taking place in connection with the Norochcholai (Lakvijaya) Coal Power Plant located in Puttalam.

Daily Mirror uncovered that the 306-square kilometre coral reef sanctuary located 15 km from the Norochcholai Coal Power Plant and identified as a favourite amongst tourists, is currently facing the threat of being destroyed.

The power plant has the potential to meet part of the country’s electricity requirement, but the coal ash and dust particles emitted from the plant pose a serious threat to the area’s agricultural crops as well as marine life and the coral reef sanctuary in Kalpitiya.

It is in this backdrop that the Government has focused its attention on implementing the third phase of the Norochcholai Coal Power Plant.

According to an EIA conducted in the Kalpitiya sea area, it has been discovered that the release of water at a temperature of around 7 degrees centigrade (°C) to the sea by the coal power plant has led to the destruction of marine life in the vicinity including seaweed.

Furthermore, the discharge of coal ash particles from the power plant into the sea, and the coal that falls into the sea while it is being unloaded at the power plant, which melts and flows into the Kalpitiya Coral Reef Sanctuary Zone, are also compounding the destruction of the coral reef.

It is learnt that several government departments have informed the Norochcholai Coal Power Plant management about their concerns in writing, but no government agency has been appointed to oversee it.

When inquired, Director General of the Department of Wildlife Conservation (DWC),  M.G.C. Sooriyabandara said that that the EIA report had shown that grave damage is being caused to the coral reef sanctuary area due to the water that is being released into the sea by the Norochcholai Coal Power Plant and the dust particles emitted by the coal combustion process.

However, he said that despite the Norochcholai Coal Power Plant management being notified of this matter on several occasions, it had not had any effect. Additionally, the fact that there is no institution to monitor this process has given rise to many issues.

Although the Department of Wildlife Conservation has authorised the preparation of EIAs on several such projects, it is unfortunate that there is no mechanism to monitor them.

He also said that in some cases, when the management of the Norochcholai power plant is questioned about the extinction of these marine life, the information they provide is not true and accurate.

Sooriyabandara said that based on information received by the DWC, there has been some impact on the Kalpitiya sea area due to the Norochcholai power plant, adding that the Central Environmental Authority (CEA) should look into this matter and take appropriate legal action.

When inquired about this, the Chairperson of the Marine Environment Protection Authority (MEPA), Attorney-at-Law Dharshani Lahandapura said that it has been identified that the water released from this power plant as well as the coal emissions are causing some damage to the marine environment of the region.

An EIA has shown that part of the coral reef sanctuary is covered with coal ash dust particles.
However, she said that when inquired, the Norochcholai Coal Power Plant officials claim that the water is cooled prior to being released into the sea.

However, she said she was ready to discuss the matter directly with the Norochcholai power plant management in the future and that this was a serious environmental problem.

Although the MEPA has some responsibility to look into this matter, the DWC has a greater responsibility, said MEPA Chairperson Lahandapura.

When inquired regarding this issue, the Secretary to the Ministry of Environment, Dr. Anil Jasinghe said that he was not aware of such a situation, and added that although the sea was a vast area, steps would be taken to pay more attention to this, as there is an obvious impact.

He said that although this plant is based on Chinese technology, it cannot be deemed that there is no issue, adding that some of the responsibility also falls on the Ministry of Power as well.

Dr. Jasinghe added that the Ministry of Power should definitely get involved in resolving this issue, pointing out that under these circumstances, it would be problematic to implement the third phase of the Norochcholai power plant.

The DWC’s Assistant Director in charge of marine reserve sanctuaries, Manjula Amararatne said that the Hikkaduwa, Rumassala, and Kalpitiya zones have been brought under the Department of Wildlife Conservation through a special gazette notification.

Amararatne said that the coral reefs face the danger of being destroyed even if the ocean temperature increases by a mere one degree centigrade. It has been identified that the temperature of the seawater in the vicinity of the Norochcholai power plant has increased, and it is very noticeable even when you touch the water.

“However, it is not known whether this is monitored by any agency adding that its monitoring should be done by the same institution that carried out the EIA,” he opined.

Assistant Director Amararatne said that as the Norochcholai power plant has a dolphin zone about 5-6 km away, more attention should be paid to this issue.

It has been reported that as the ash from this coal power plant was not purchased by any company, it is being released into the sea.

When this matter was brought to the notice of President Gotabaya Rajapaksa by Colombo Archbishop Malcolm Cardinal Ranjith, the President had promised to take immediate action.

The CEJ Executive Director Vithanage further stated that the Department of Wildlife Conservation, Marine Environment Protection Authority, Ministry of Environment, Central Environmental Authority, and the Ministry of Power and Energy should intervene in this matter.

A senior official of the Puttalam Wildlife Zonal Office stated that the fish in the area are in danger of extinction due to the water at a temperature of 7°C being released from the Norochcholai power plant.

He said that if this situation is not addressed, there is a possibility that dolphins, which are abundant in the Kalpitiya region, may also be affected in the future. He added that an EIA report should be obtained again before the commencement of the third phase of the Norochcholai Coal Power Plant.

This officer further said that a recent search had found that there was no seaweed or sea creatures in the sea around the Norochcholai Coal Power Plant. (Courtesy Daily Mirror) 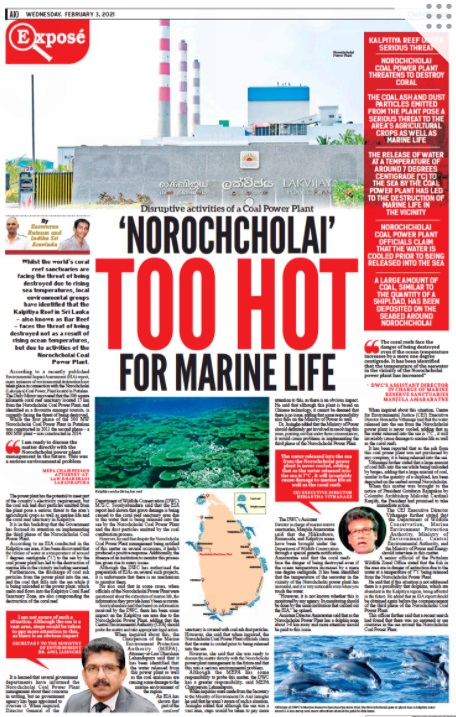