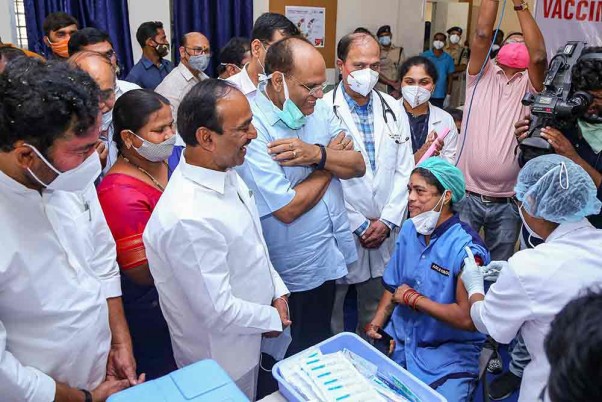 Considered to be the world’s largest vaccination program, it covers 30 million health care and frontline programme workers across India in the first phase.

The endeavor is to cover 300 million in the second phase. Elderly population and those with serious illness would be the focus groups in this phase.

A total of 3006 session sites were virtually connected during the launch with around 100 beneficiaries being vaccinated at each session site on the inaugural day.

The massive vaccination programme is powered by Co-WIN, an indigenously developed online digital platform, which will facilitate real time information of vaccine stocks, storage temperature and individualized tracking of beneficiaries.

A dedicated 24×7 call centre  has also been established to deal with all issues pertaining to administration of the vaccines.

India released its first COVID-19 advisory on 17 January 2020 and was among the first countries to start screening passengers at its airports. Specifically on vaccines, he said that Indian vaccines were built on tried and tested technology in India and added that these vaccines will give a decisive victory to India in fighting the pandemic. (Colombo Gazette)