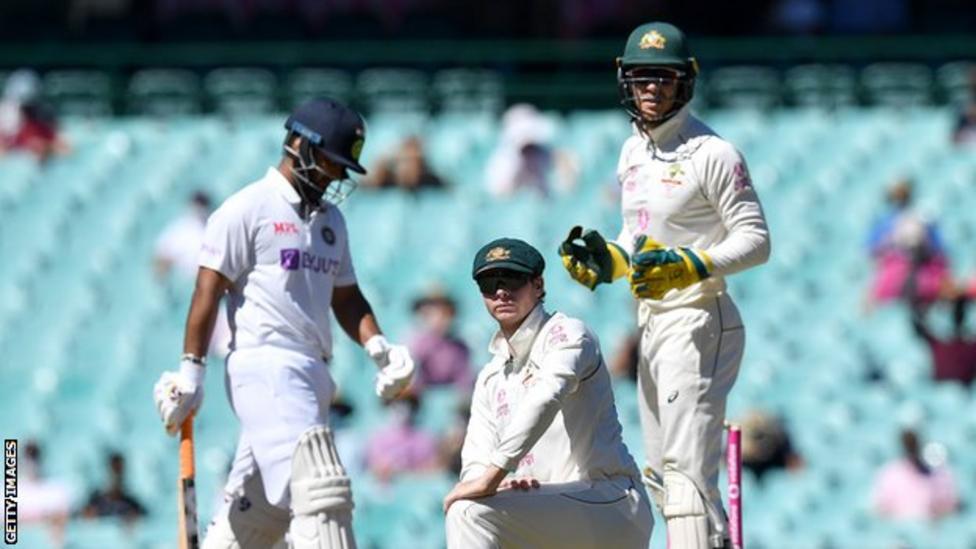 Australia batsman Steve Smith says he is “shocked and disappointed” at suggestions that he deliberately scuffed up the crease during the final day of the third Test against India.

The former captain was seen on the stump camera scraping the crease with his boot during a drinks break.

Smith denied accusations he was deliberately removing the marks used to guide India’s batsmen at the crease.

“It’s something I do to visualise where we are bowling,” Smith told News Corp.

“It’s something I do to visualise how the batter is playing our bowlers and then out of habit I always mark centre.

“It’s such a shame that this and other events have taken away from what was a great batting performance by India yesterday.”

Australia captain Tim Paine had earlier defended Smith, who was heavily criticised on social media, saying he was “certainly not changing a guard”.

“I imagine if he was, the India players would have kicked up a bit of a stink at the time,” Paine said.

“As we know, he has those many Steve Smith quirks – one of those is he is always marking centre.”

India batted out a tense final day to salvage a draw, ensuring the series remained level at 1-1 going into the final Test in Brisbane, which starts on Friday.

Smith, who was sacked as captain in 2018 and banned following the ball-tampering scandal, was seen shadow batting and then scuffing the crease with his boots. When India batsman Rishabh Pant returned to the crease, he had to ask the umpire for his guard again.

“[Smith] is disappointed with the way it has come across,” Paine said.

“That is something he does every single game, five or six times per day. He likes to walk up to where he bats and visualise where he is going to play.

“Yesterday you could see him up there playing a couple shots as left-hander as if where he wanted [Australia spinner Nathan Lyon] to pitch the ball. It is one of his mannerisms.”

England all-rounder Chris Woakes said: “There’s only one person who knows whether he was doing it to affect the opposition batsman or not and that’s Steve himself.

Speaking from Sri Lanka, where England begin a two-Test series on Thursday, Woakes added: “It’s hard for me to sit here and watch from a million miles away and say he was doing it to get into the Indian batsmen’s mind.

“It is not the first time I’ve seen something like that happen.

“It’s one of those things where a lot of the time some of that might go unnoticed, but it’s such a big occasion that it’s easy to jump on it.”

Paine apologised for his own behaviour on the final day after he was embroiled in a sledging incident with India’s Ravichandran Ashwin.

The wicketkeeper, who dropped three catches during the innings, was heard on the stump microphone using an expletive to insult Ashwin.

“I’m someone who prides himself on the way he leads this team and yesterday was a poor reflection of that,” said Paine, who was also fined 15% of his match fee for dissent to an umpire on day three.

“My leadership wasn’t good enough, I let the pressure of the game get to me. Yesterday, I fell short of my expectations and my team’s standards.”

Paine has led Australia since Smith’s sacking and has been credited with improving the team’s culture following the incident in Cape Town for which Smith was sacked.

“I’m human. I want to apologise for the mistakes I made yesterday,” Paine added. “We’ve set really high standards over the last 18 months and yesterday was a bit of a blip on the radar.”

Meanwhile, Australia will monitor the fitness of Will Pucovski before deciding if he is fit for the final Test.

The opener, who scored 62 on debut in the third Test, suffered a shoulder injury when diving in the field on day five. (Courtesy BBC)