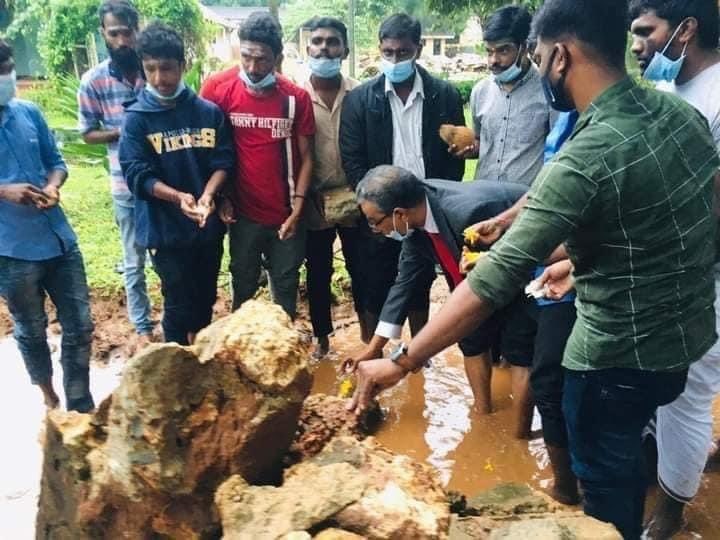 A new monument is to be constructed in the Jaffna University premises to remember those killed during the war.

Construction work was launched today with the participation of the Jaffna Vice Chancellor S. Srisatkunarajah and university students.

“The foundation stone for a memorial to replace the demolished Mullivaikkal memorial at the university was laid today (Monday morning) led by Vice-Chancellor and the Hunger Strike came to an end,” Jaffna District Development Committee Co Chairman and Sri Lanka Freedom Party (SLFP) Parliamentarian Angajan Ramanathan said in a tweet.

A tense situation arose in Jaffna on Friday after the war monument in the Jaffna University was destroyed by the authorities.

The gates of the Jaffna University had been closed and Police were deployed near the gates as the war monument was completely destroyed.

Jaffna Mayor Vishwalingam Maniwannan was among those who gathered outside the gate with several students.

The University Grants Commission (UGC) had defended the decision to destroy the war monument in the Jaffna University.

Chairman of the University Grants Commission, Sampath Amaratunge had said that the war monument was a threat to the unity in the country.

He said that the war monument was constructed in 2018 and was modified over the years.

The UGC Chairman said that the Vice-Chancellor of the University of Jaffna, Professor Sivakolundu Srisatkunarajah, had decided to remove the monument. (Colombo Gazette)