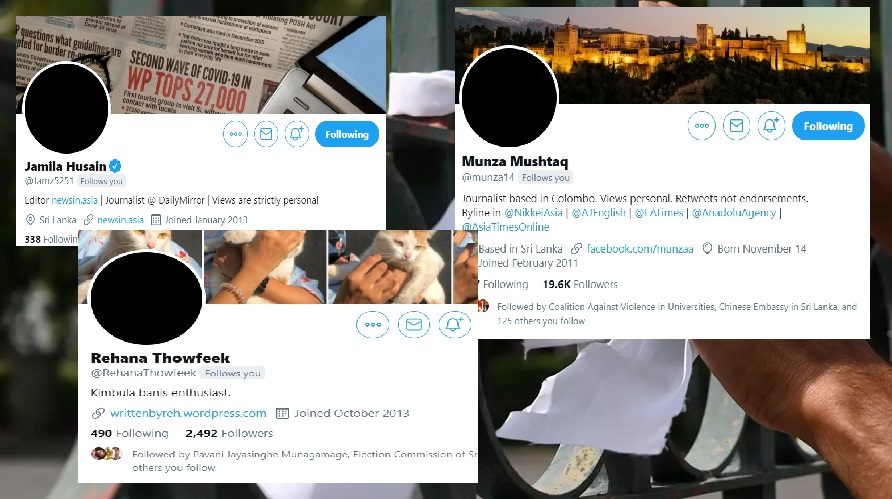 Muslims and others on twitter have switched their profile images to black in protest over a Government decision to continue with forced cremations in Sri Lanka.

A number of Muslim journalists, activists and others on twitter removed their profile pictures and placed a black image as a mark of protest.

The Government is to continue with the cremation of the remains of coronavirus victims despite a group of experts backing both burial and cremation.

Health Minister Pavithra Wanniarachchi told Parliament yesterday that a sub-committee to the expert committee, which was appointed to deliberate burials, has recommended that the bodies of Covid victims should be cremated.

The Health Minister said that the decision to cremate remains of Covid victims in Sri Lanka will not be withdrawn on religious, political or any other grounds.

“Mr. President @GotabayaR  History will mark this day as the day you failed in your mandate to be a ‘President for All Sri Lankans’, for you have callously ignored the sensitivities of Sri Lankan Muslims who are a part of this nation,” Aman Ashraff tweeted.

“President @GotabayaR and PM @PresRajapaksa, I plead with you’ll if your expert committee has any proof which even the WHO doesn’t have which shows burials cause harm, then share it with us. If not, do not let an entire community suffer,” journalist Jamila Husain tweeted.

Youth for Justice Sri Lanka, a coalition formed by youth organizations to create a constructive discourse around matters that directly affect young people and their future, said that as the generation that was brought up amidst a brutal civil war and suffered its consequences, they believe if necessary steps aren’t taken to rectify the situation and allow the Muslim community to perform their last rites according to the religious beliefs, the youth will have to suffer the repurcussions of the short-sited, racially motivated decisions of the State again.

“We therefore call on the government to act on the advice of the scientific community and
immediately end the ongoing policy of mandatory cremation,” Youth for Justice Sri Lanka said.

Health Minister Pavithra Wanniarachchi told Parliament that the expert committee will announce its final decision after studying the report submitted by the sub- committee. (Colombo Gazette)

President @GotabayaR and PM @PresRajapaksa, I plead with you’ll if your expert committee has any proof which even the WHO doesn’t have which shows burials cause harm, then share it with us. If not, do not let an entire community suffer #StopForcedCremations