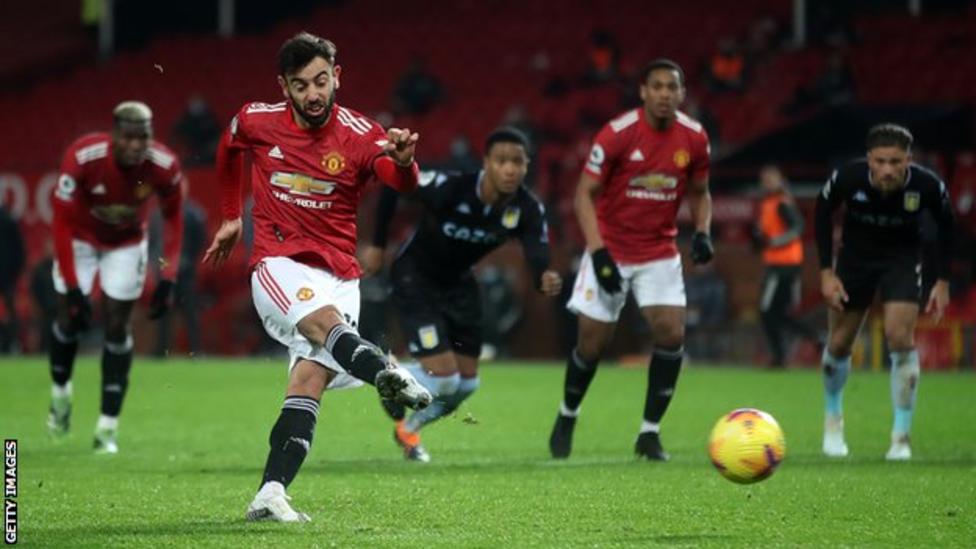 Fernandes drilled his 11th league goal this season – and his fifth from the spot – into the bottom corner to punish Douglas Luiz’s clip on Paul Pogba and hand United an eighth win in 10 games.

But Fernandes’ penalty extended United’s hold over Villa – they have now won 32 and lost just one of the past 44 league meetings between the sides – and leaves Liverpool top only by virtue of goal difference.

The spot-kick award angered Aston Villa boss Dean Smith who claimed Pogba “tripped himself” and that the video assistant referee should have asked on-pitch official Michael Oliver to review his decision.

“I don’t see why Michael couldn’t have looked at it. That’s what VAR is for isn’t it?” Smith told BBC Sport.

“I thought it was a penalty at the time, but I looked at it after the game and saw he tripped himself. I don’t think it’s a penalty.

“I think there’s enough doubt there to send the referee over to the screen.”

Smith’s side were perhaps unfortunate not to have left Old Trafford with at least a point from a thoroughly entertaining game but they also needed several fine saves from Emiliano Martinez to keep them in it.

After Fernandes’ spot-kick put United back in front, Martinez superbly tipped a stinging 25-yarder from the Portuguese on to the crossbar as well as denying Martial a second.

Martinez’s counterpart David de Gea was just as busy, with a late save from Matty Cash’s long-range strike preserving the points, not long after Tyrone Mings had headed wide a glorious chance to level.

Ole Gunnar Solskjaer’s side have displayed their ability to grind out points at Old Trafford in recent weeks, as evidenced in 1-0 home wins over both West Bromwich Albion and Wolves.

But they have also shown a willingness to go toe-to-toe with teams who are happy to open up the game and, while this was not quite the shootout of the 6-2 win over Leeds, it was just as easy on the eye.

A number of fluid first-half moves produced chances before Martial’s opener as the France forward saw a curler tipped over by Martinez, while Fernandes and Wan-Bissaka were narrowly off target with similar efforts.

Martial stole between Mings and Ezri Konsa to nod the Red Devils ahead from Wan-Bissaka’s inviting cross for only his second league goal of the season on his return to Solskjaer’s starting line-up.

While Luiz was unfortunate to be penalised for what might have been an accidental clip on Pogba, there was enough contact for the penalty to be given and Fernandes continued his excellent record from the spot.

United were nine points behind Liverpool after a 1-0 defeat by Arsenal at Old Trafford on 1 November but have made up that gap in just two months to set an intriguing title race into motion.

A minute’s silence before the game paid tribute to former boss Tommy Docherty, who famously prevented Liverpool claiming the treble by leading United to an FA Cup win over the Reds in 1977.

And while talk of foiling a second successive Liverpool title might be premature, moving alongside them at the Premier League’s summit will give Solskjaer’s side even more confidence as they eye up a trip to Anfield on 17 January. (Courtesy BBC)