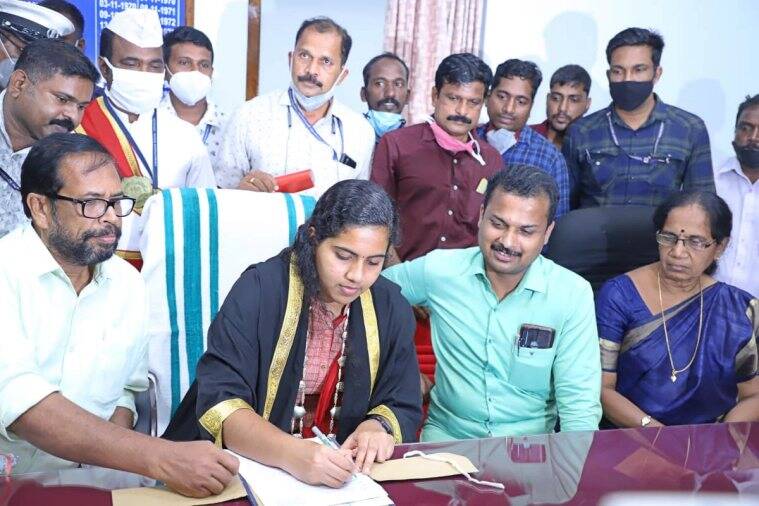 Sri Lanka congratulated Thiruvananthapuram’s youngest Mayor, Arya Rajendran, after she was elected to the post today.

Arya Rajendran, a 21-year-old CPI(M) leader, was sworn-in Monday as the youngest mayor of Thiruvananthapuram Corporation, the largest urban body in Kerala.

“Congratulations to young #AryaRajendran for being elected the mayor of #Thiruvananthapuram Municipal Council in #India. No doubt your success story will pave way and inspire more youngsters, particularly women, to follow your path,” Sports and Youth Affairs Minister Namal Rajapaksa tweeted.

Collector Navjot Khosa administered the oath of office to Rajendran inside a tightly-packed, history-in-the-making council hall after the latter was elected mayor with 54 votes out of 99 votes cast, the Indian media reported.

The election of the 21-year-old was a foregone conclusion as the CPM-led LDF had 51 members in the 100-member council, the Indian Express reported. The BJP, which had campaigned extensively this time in the hope of capturing power in the corporation, stood second with 34 members and the Congress-led UDF in third place with 10 members. Five members were Independents.

Rajendran’s nomination to the mayor’s post, which is reserved for women this time, was a surprise choice by the CPI(M) last week and seen as the party’s strategy to thank younger voters who stood with them in this election. The party chose Rajendran as she’s been with the CPM since class five when she took membership in the Balasangham and her family have been supporters of the CPI(M) for many decades. (Colombo Gazette/Indian Express)