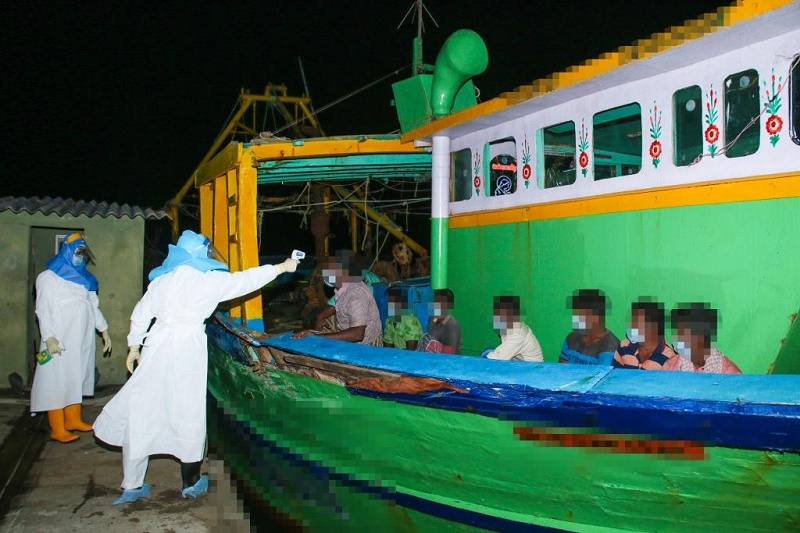 The operations led to the arrest of 36 Indian nationals along with 05 fishing trawlers and fishing accessories used for poaching in Sri Lankan waters.

The Navy said that the Northern Naval Command, during a special operation in the sea area off the Delft Island had intercepted 03 Indian fishing trawlers and held 22 Indian nationals onboard for poaching in Sri Lanka’s waters.

Elsewhere in the sea area north of Mannar and west of Kudiramalei Point, 14 more Indian nationals and 02 fishing trawlers were held by the North Central Naval Command and Northwestern Naval Command respectively, for poaching in Sri Lankan waters.

The Navy said all the search operations were conducted while adhering to the COVID-19 preventive guidelines.

Meanwhile, arrangements have been made to direct the Indian nationals for 14 days quarantine.

Although operations to prevent poaching by foreign fishermen in Sri Lankan waters have been restricted since March 2020 due to COVID-19 concerns, the Navy had recently resumed its raids on poaching.

The Navy said the measures were taken after considering the impact of poaching on the livelihood of the local fishing community and to protect the fishing resources of the country.

According to the Navy there was a surge in Indian fishing trawlers entering Sri Lankan waters. (Colombo Gazette)