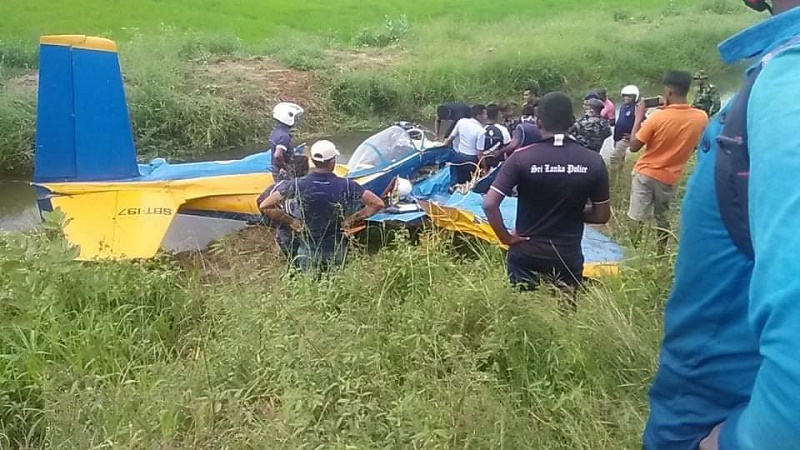 A PT-6 training aircraft belonging to the flying and training wing of the Air Force base in China Bay, Trincomalee has crash landed in a field in Kantale.

The PT-6 aircraft has the capacity to carry 2 passengers, usually the instructor and the trainee pilot.

Group Captain Wijesinghe said the aircraft was dispatched from the China Bay base on a solo flight operated by the trainee.

He added that this was the procedure followed by the flying and training wing of the Air Force base in China Bay as part of its training program.

The Air Force Spokesman said investigations are underway into the incident.

Meanwhile, the Police said the PT-6 Air Force aircraft had crash landed in a field near the ‘Janaranjana’ tank in Suriyapura, Kantale.

The Police further said that the trainee pilot was found inside the aircraft at the location.

However, the Director of the Trincomalee Hospital confirmed that the trainee pilot of the PT-6 aircraft had died on admission to hospital.

Officer Cadet Amarakoon KRSVB was a past pupil of Kegalle Maha Vidyalaya and had joined the Sri Lanka Air Force in January 2019. He had commenced his flying training in July of the same year. (Colombo Gazette)

Sri Lanka Air Force to get aircraft equipment from US military