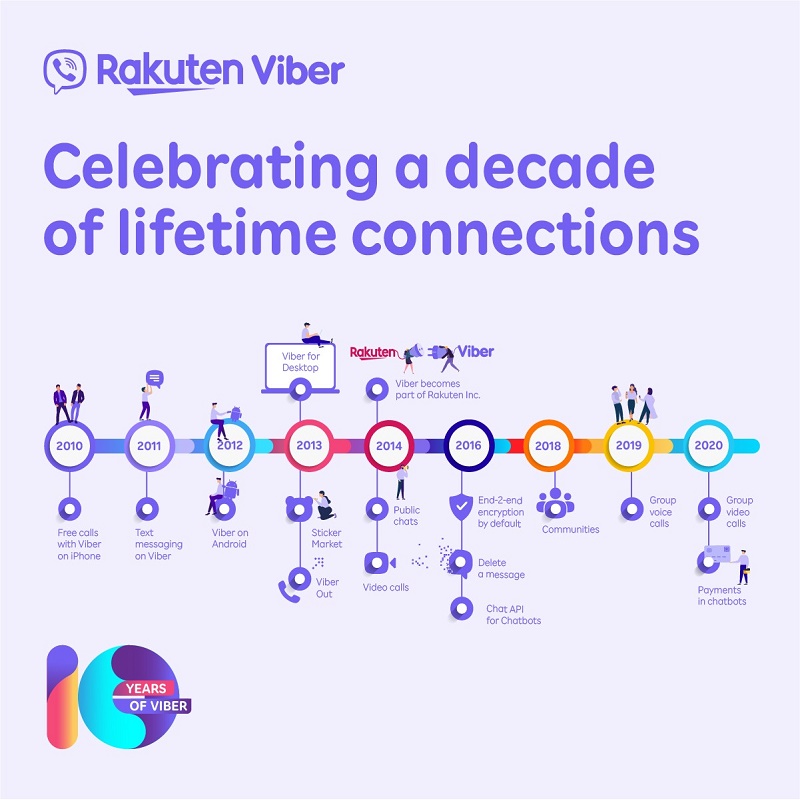 Rakuten Viber, one of the world’s leading apps for free and easy communication, celebrates a decade of enriching Sri Lankan lives with its unique messaging platform, one that values users’ privacy and mobile technology.

Viber was launched in 2010, with the simple goal of providing an alternative medium of communication, offering free calls to international mobile users. Over the past decade, Viber has become a household name in Sri Lanka for its free, interactive, and secure messaging that allows people to connect with whoever they want, wherever they are.

In 2014, Viber became part of Rakuten Inc., a world leader in e-commerce and financial services. Subsequently, in 2018 ‘communities’ was launched creating a massive milestone for the company, empowering admins to create supergroup chats where they can add an unlimited number of people. The year after, the group voice calls feature was also launched.

To-date Rakuten Viber has evolved, disrupting the industry and becoming a comprehensive communication platform offering a suite of features such as messaging, group chats, audio and video calls, communities, and chatbots, while ensuring and keeping its core promise of privacy to users.

“Viber’s journey over the last 10 years wouldn’t have been possible without the hundreds of millions of people who trusted us with their personal communication, and with them we have grown into what we are today. At Viber, our promise to our users has always been to provide a free and secure way for them to stay connected with their world. As technologies continue to take a bigger part of our lives, data privacy and security of communication becomes increasingly important. Viber employees are committed to continue working hard for this critical mission. For most of you, they are anonymous. But trust me when I say they are the best team one can ask for,” says Djamel Agaoua, CEO of Rakuten Viber.

In addition, Viber is well on its way toward becoming an all-encompassing communication platform expanding into utilities and fintech, while never relenting on its commitment to protect user privacy.

Over the years Viber has seen accelerated growth in Sri Lanka with continued records in usage. Compared to 2019, during the first half of 2020, a 39% increase in daily activations, and a 34% rise in sending group messages, with a growth of 91% in the number of messages sent in a group has been witnessed. Moreover, 1 to 1 messages increased by 37%, and Community views surged by 118%.

To offer Sri Lankan users enhanced services, Viber has over the years begun investing in localising the app and partnering with key local organisations.

Among the significant milestones include partnering with People’s Bank, one of the largest state banks, the Health Promotion Bureau, the Department of Government Information and the President’s Media Division for verified information, collaborating with the World Health Organisation, Sri Lanka delegation, partnering Cargills FoodCity, the biggest supermarket chain, and also working with the National Lottery Sri Lanka.

Globally, in 2020, Viber introduced a few features that proved to be essential during the pandemic, such as group video calls, and bolstered its capacities, doubling the maximum number of participants to 20 people at once in Group Video and Audio Calls. In November, the company also announced its future plans to expand further into the fintech world, introducing its newest chatbot payments solution.

“It all started with a very simple mission to help people communicate with their loved ones,” says Anna Znamenskaya, Chief Growth Officer at Rakuten Viber. “Now that the world is changing at an exponential rate, so too are the means through which we communicate. Viber aims to always stay ahead of the curve for its users, as we always have.”

As a part of its tenth birthday celebrations, Viber is partnering with well-known Sri Lankan companies by giving back to all users who made it all possible. Viber is handing out coupons, special discounts and vouchers for all users who spin the wheel of fortune chatbot. Partners who have teamed-up and offering exciting prizes include Fashion Bug with Rs. 500 off on purchases, Mobitel with 1 GB Free Data offer, Kapruka – 20-30% discounts on selected products, Ustore.lk is offering Rs. 50 – 10,000 worth cash value vouchers along with discount coupons ranging from 15-50% on Unilver products and from Dominos, an offer of three free Garlic Breads. Grab these awesome gifts inside the Viber Wheel of Fortune chatbot. Spin the wheel now using this link.

At Rakuten Viber, we connect people. No matter who they are, or where they are from. Our global user base has access to a range of features like one-on-one chats, video calls, group messaging, and updates and discussions with their favorite brands and celebrities. We ensure our users have a secure and free environment to share their emotions.

Rakuten Viber is part of Rakuten Inc., a world leader in e-commerce and financial services. It is the official communication channel of FC Barcelona, and the official instant messaging and calling app partner of the Golden State Warriors.