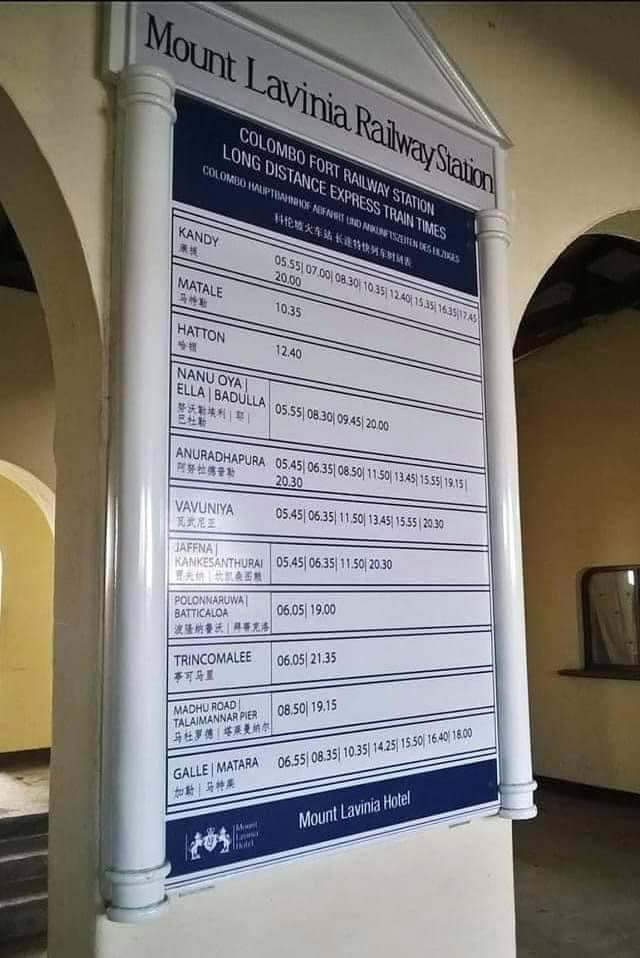 The Railway Department is to launch an investigation into a notice board placed at the Mount Lavinia railway station which is in mandarin (Chinese).

The notice board gives the long distance train times in English and Mandarin.

Sri Lanka Railways General Manager Dilantha Fernando told Colombo Gazette that he had seen an image of the notice board being circulated on social media.

Fernando said that the notice board had been installed before he became General Manager.

He said that he has launched an investigation to gather details on who was responsible for the installation of the board.

Fernando said that following the investigation steps will be taken to remove the board if there is such a requirement.

The Official Languages Commission said recently it is considering proposing new laws requiring all local and international private institutions operating in the country to display name boards bearing only the official languages of Sri Lanka.

The Assistant Director of the Commission Sivapragashan Madhivanan had told Colombo Gazette that some Chinese institutions operating in Sri Lanka have displayed name boards in Mandarin, which is a violation of Article 4 of the Constitution of Sri Lanka.

Under the Constitution, all organizations are required to display name boards prioritizing the national languages of Sinhala and Tamil, and thereafter English which is considered an alternative language.

Madhivanan said that a complaint was filed with the Commission on the displaying of a named board prioritizing the Chinese language for the China funded Aruwakkalu sanitary landfill project in Puttalam under the former Government. (Colombo Gazette)