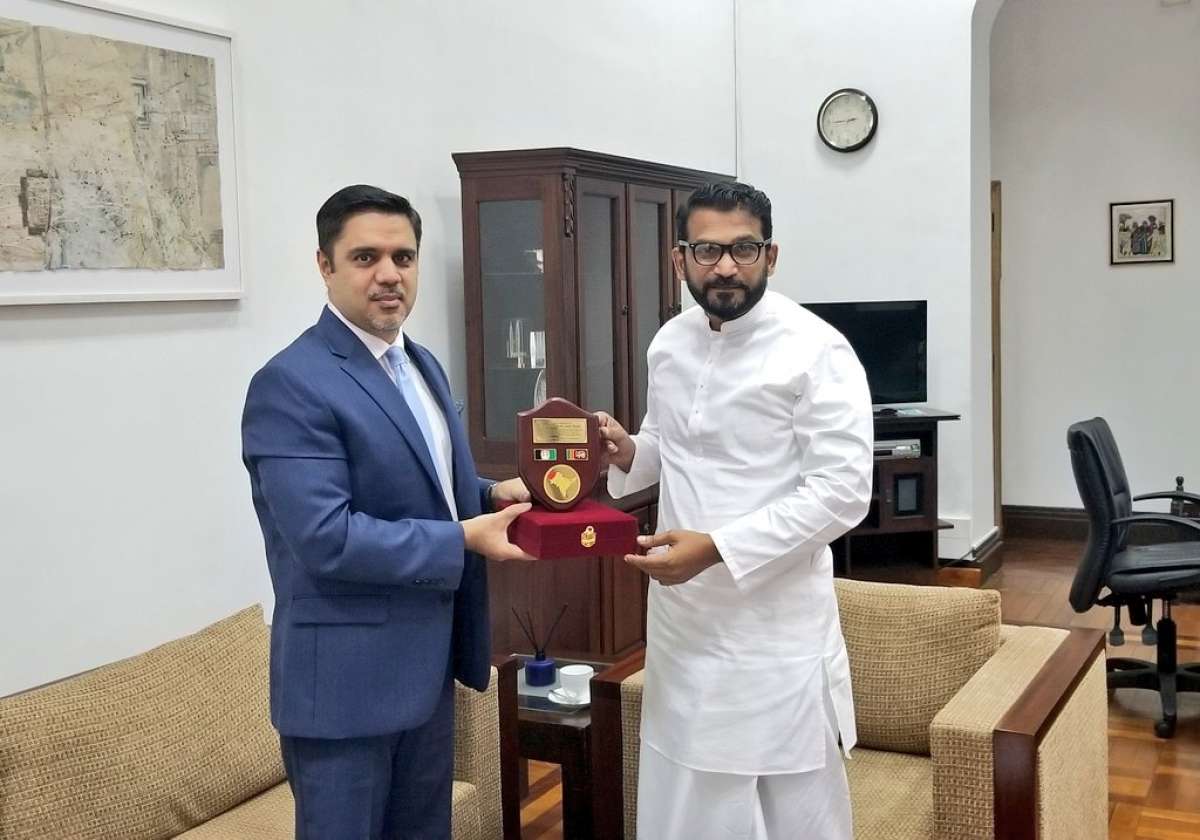 Afghanistan and Sri Lanka are to sign an agreement on the transfer of sentenced persons.

They proposed agreement will facilitate mutual legal assistance cooperation between the two countries.

Following their last September’s fruitful meeting, Ambassador M. Ashraf Haidari called on Sri Lankan Minister of State for Regional Cooperation Tharaka Balasuriya to discuss the tangible progress, which the two sides have made in the overall growing Afghanistan-Sri Lanka bilateral relations over the past quarter.

Ambassador Haidari highlighted as a sign of mutual commitment to stronger bilateral ties the recent high-level exchange of messages between the leaderships of Afghanistan and Sri Lanka on the celebration of the 62nd Anniversary of the Establishment of Diplomatic Ties between the two countries. He also noted with gratitude Sri Lanka’s strong condemnation of the recent terrorist attack on Kabul University and its support of the Afghan peace process to end the imposed terror campaign, daily claiming innocent lives and limbs across Afghanistan.

Moreover, Ambassador Haidari informed the State Minister of having facilitated the signing of a cooperation MOU between the Ceylon Chamber of Commerce (CCC) and the Afghanistan Chamber of Commerce and Investment (ACCI) in September, as a major shared achievement. The Ambassador noted that since the MOU was signed, several developments had already taken place, including the introduction of Ambassador-Designate Piyal De Silva to the business community of Sri Lanka with an interest to invest in Afghanistan, as well as frequent business meetings at the Afghan Embassy.

In the same vein, a cooperation MOU was signed between two major think-tanks of Afghanistan and Sri Lanka in October: The Regional Center for Strategic Studies (RCSS) and the Afghan Institute for Strategic Studies (AISS). This achievement helps further deepen ties between the vibrant civil societies of Afghanistan and Sri Lankan as two major South Asian democracies.

On cooperation in the education sector, the Ambassador highlighted his fruitful meetings with the Sri Lankan Minister of Education, Chairman of the University Grants Commission, as well as Vice Chancellor of the KDU Defense University, each of whom has positively and generously responded to Afghanistan’s request for full and partial scholarship opportunities for Afghan students and cadets to study in Sri Lanka. In addition, the Sri Lankan Minister of Youth and Sports has offered his full support for further strengthening ties between the cricket teams of Afghanistan and Sri Lanka, while planning to visit Kabul as soon as possible.

Ambassador Haidari and Minister Balasuriya warmly welcomed both sides’ shared progress in procedurally finalizing the Political Consultations MOU and the Air Services Agreement for bilateral signature in the near future. At the same time, they discussed the pending status of the Trade and Investment Promotion and Protection Agreement, which, once signed, should pave the way for the signing of a bilateral free trade agreement (FTA). “These frameworks of cooperation will immensely help connect the Heart of Asia with the Jewel of the Indian Ocean towards an ever-growing multi-faceted friendship and partnership,” Ambassador Haidari told the Minister.

They concluded their regular review-of-progress meeting with a discussion of the importance of signing the initialed Agreement on Transfer of Sentenced Persons, facilitating mutual legal assistance cooperation between the two countries, which Sri Lankan Minister of Justice Ali Sabry welcomed and supported in his last meeting with Ambassador Haidari.

Finally, both sides reaffirmed their strong commitment to further strengthening the win-win ties that have so far evolved between Afghanistan and Sri Lanka. To that end, Ambassador Haidari presented to Minister Balasuriya the Afghanistan-Sri Lanka Friendship Plaque, which carries the following message: “With the Compliments of HE Ambassador M. Ashraf Haidari Towards an Ever-Growing Trusted Friendship and Partnership with Sri Lanka in a Future of Shared Peace and Prosperity across South Asia.”