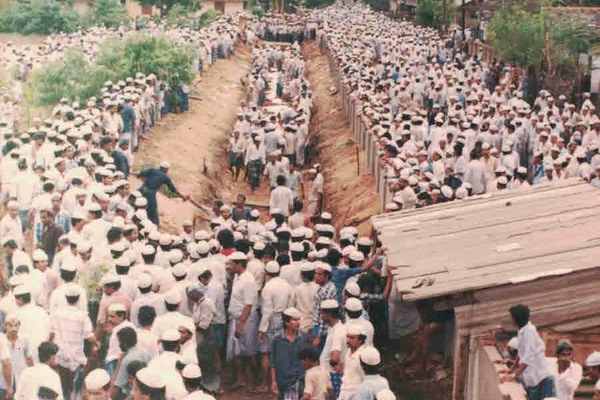 The day was 3 August 1990. The time was approximately 8.15 p.m. The place was Kattankudy. LTTE cadres entered the Meera Jumma Masjid (mosque) and mercilessly opened fire at worshipers.

Gunmen attacked two mosques in the Kattankudy area that night, the Meera Jumma Masjid and the Hussainiyya Mosque in Manchanthoduwai. Over 140 Muslims were killed, and among them were children.

Today, Kattankudy is in the spotlight following the Easter Sunday attacks.

The town was where the mastermind of the Easter attacks, Zahran Hashim, operated from before he went missing, only to surface and carry out the suicide attacks on 21 April.

The people of Kattankudy never expected Hashim to plot such an attack.

The horror carried out by Hashim and his followers came 29 years after the LTTE took away innocent lives in Kattankudy.

Jabir was just 15 years old in 1990 and he never thought he would be in a situation where the wrong move would have cost him his life.

The young boy, now in his 40s, told The Sunday Morning that he was at the Meera Jumma Masjid (mosque) on 3 August 1990 with his brother and some relatives.

“While we were praying, we suddenly heard gunshots and those around me began falling dead. I slept on the ground fearing for my life,” Jabir said.

Jabir remembers the gunmen standing at the entrance and spraying bullets all around.
All those who attempted to run were shot dead. Jabir says at least 70 people were killed that night, including his brother.

I remember getting up covered in blood and I was in shock. I later realised that my 17-year-old brother was also killed,” he said.

Jabir said that four of his relatives who were at the mosque at the time were killed too.
“The gunmen did not come close to see if all were dead. They shot from a distance and left. If they came close, they would have found a few of us alive and would have killed us as well,” he said.

Muslims at the second mosque, the Hussainiyya Mosque in Manchanthoduwai, were not so lucky. The gunmen had reportedly taken a closer look at the victims to ensure they were dead, and killed those alive.

Jabir said that following that incident, he feared returning to the mosque. He feared that the gunmen may return. It took him some time to get back to normal life.

Not forgotten, but forgiven

Mohammed Casim Mohammed Ameen was also at the Meera Jumma Masjid at the time.
He, like Jabir, slept on the ground and escaped. However, he suffered injuries to his body and legs.
“We were praying when the gunmen opened fire from behind us. People started screaming ‘Allahu Akbar’ when the shots were fired and grenades were thrown inside. We did not know what hit us as the gunmen were behind us,” Mohammed Ameen said.

He said that after the first round of shots was fired, the gunmen briefly paused and started firing again.
Mohammed Ameen said that when the firing eventually stopped, the carnage was very clear. There were bodies everywhere. 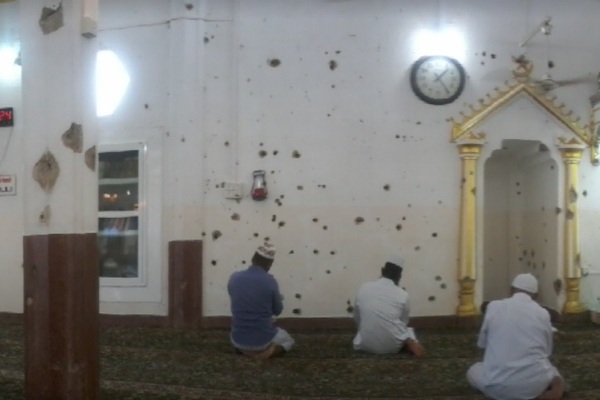 Ameen said that he was among those airlifted out of Batticaloa for urgent treatment.

Soon after the massacre, government troops launched an operation in the area to capture the killers. One of the helicopters involved in the search shot at two boat loads of LTTE rebels off the sea at Kattankudy.
The incident was reported as the worst massacre of civilians in Sri Lanka at the time. All the victims were buried at a cemetery in the area where mourners dug a long common grave for a row of coffins.

Mohammed Ameen, who was 21 years old at the time, said that he will never forget the day he escaped death, but has found the strength to forgive. “It has been confirmed that the LTTE carried out the attack. I will never forget that day, but I have forgiven those responsible,” he said.

Ameen said that the attack had not strained his relationship with the Tamil community.
He said he learnt to move on with his life and hopes that such an incident does not occur again.
The LTTE never admitted to carrying out the attack, but the Tamil National Alliance (TNA), in 2010, expressed regret over the attacks.

Muslims want to live in peace

The 1990 incident affected the relationship between Tamils and Muslims, not just in the East but other parts of the country as well.

The LTTE was fighting for a separate state for the Tamils in the North and East and the attack on the mosques was seen as an attempt to remove Muslims from the East.
Federation of Civil Society Organisations in Kattankudy President M.B.M. Firthous Naleemi told The Sunday Morning that the relationship between the Tamils and Muslims remained strained from 1990 to 2009.

owever, he said since the end of the war, efforts had been made to unite Muslims and Tamils.
“We had been looking at transitional justice and the need to know the truth, forgive, and move forward,” he said.

aleemi said that Muslims in the East are keen to live in peace with all communities.

He said the Easter Sunday attacks and the links the mastermind of the attacks had with Kattankudy had not helped the town in its efforts to move forward following the war.

Following the Easter attacks, the Federation of Civil Society Organisations in Kattankudy insisted that Sri Lankan Muslims would at no point support any forms of terrorism, and will always stand together with the people of the country for a better Sri Lanka. (Courtesy The Sunday Morning)